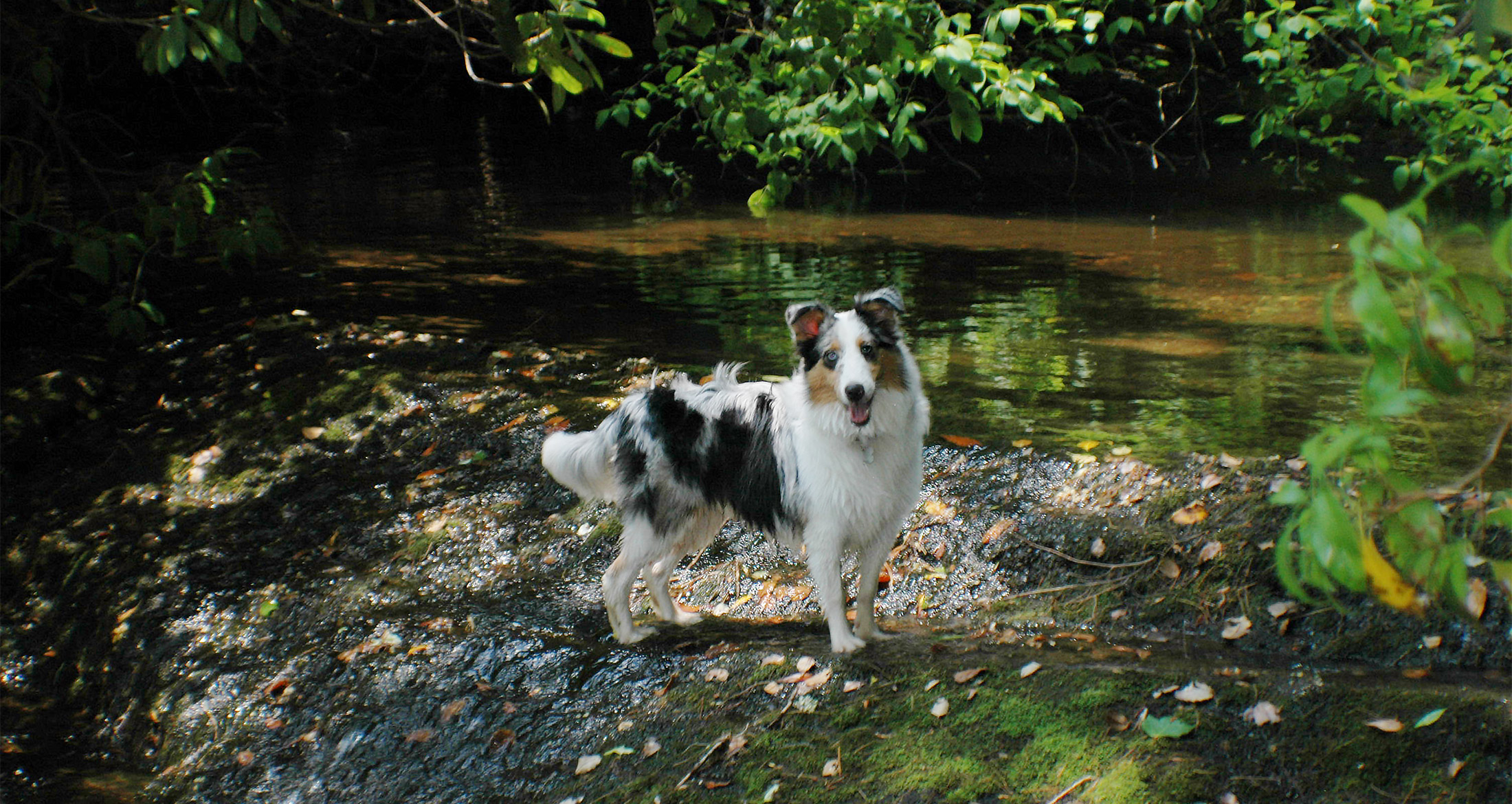 Taj was my beloved companion. A blue merle Sheltie. He had a long and wonderful life. Last week we said goodbye, and he passed on peacefully to the next life.

I met Taj at a Petland in Orlando, Florida. It was 15-years-ago. Not long after graduating from college, and shortly after marrying my ex-wife. It feels like a lifetime ago. He was a Shetland Sheepdog — like Lassie. But with a beautiful blue merle coat.

Taj was already 6-months-old when we met. Sadly, he spent those first months of his life confined to a small cage within the plaza pet store. After playing with him for a few minutes, I knew he was mine. I named him after my favorite surfer of the time, Taj Burrow, and he came home with us.

We lived in a small apartment. When I took out the trash, I would let Taj tow me to the dumpster on my skateboard. I thought it was fun, and good exercise for him. Little did I know, he must have thought I was chasing him with the skateboard. As a result, he developed a lifelong hatred for skateboards. It wasn’t the only thing Taj hated. He also hated lawn mowers, golf carts, delivery trucks, and vacuum cleaners. But nothing living. Taj loved every person, dog, and creature he ever met. There wasn’t an aggressive bone in his body. Once, I watched a butterfly land on the end of his long snout. He just stood still, and just watched the butterfly in appreciation.

Above all else, Taj loved food. I’ve never met a more food motivated dog. He ate entire loaves of bread, plastic bag and all. He ate pies wrapped in tinfoil. And he ate poop — poop of all kinds. If you turned away from your plate for a moment, he would snatch your entire meal away faster than you could blink. Of course, he got disciplined for this behavior, but the reward always outweighed the punishment.

In his early days, Taj spent a lot of time at the Lake Baldwin Dog Park in Winter Park. The moment he was unleashed, he would run like a bat out of hell across the 20+ acres of land, herding groups of dogs like they were cattle. Then, he would cool himself off at the edge of the lake with his buddies. It was his favorite place in Orlando.

When Taj was about a year and a half old, we left Orlando behind for Hawaii. Taj slept in a tiny space in the vehicle, carved out among all our belongings. He rode peacefully across the entire country, from Florida to California, playing at rest stops along the way. Then, Taj boarded a plane, and flew across the Pacific Ocean to live on the island of Oahu.

He lived in the heart of Waikiki. I walked him through the crowded streets of downtown, along the Ala Wai canal, and around Kapi’olani park. On Oahu, Taj got a little sister. Kona was a tri-color Australian Shepherd from the Big island of Hawaii. She arrived by boat, and the two were inseparable. They went swimming together at Kahala Beach, and discovered a new dog park together — the Diamond Head Bark Park. There, Taj made a whole new group of friends. Friends that would join him on hikes throughout the island. He would run through the trails with his sister and friends, racing among the trees, streams, and waterfalls.

After a couple years on Oahu, Taj moved to Maui. It was a whole new island to discover. Taj and Kona would play together in the pineapple fields above Honolua, and in the cool forests of upcountry. Eventually, they got their own yard in Launiupoko, and made friends with their neighbor, Charlie. Charlie would join Taj and Kona on long hikes into the West Maui Mountains. They played around ancient Hawaiian ruins, and drank the water from volcanic streams.

Later in life, after moving back to Florida, Taj had a vet appointment due to blood in his urine. It turned out, he had kidney stones. The vet was shocked, because the types of stones in Taj’s bladder could only be the result of drinking water from a volcanic source. I explained Taj’s life in Hawaii, and it all suddenly made sense to a very confused veterinarian.

After a couple years on Maui, Taj and Kona moved to San Diego. San Diego was heaven for dogs. Dogs were allowed everywhere. Taj hung out at bars and restaurants. He played at amazing dog beaches in Del Mar and Ocean Beach. The weather in San Diego was much cooler than anywhere he previously lived, and Taj seemed to relish the cool breeze blowing through his thick coat. After a couple years, circumstances changed, and Taj and Kona left San Diego behind for Maui, once again.

Upon returning to Maui, the dogs enjoyed playing at Sprecks Beach near Paia. Then, they moved back to Launiupoko. This time, with a bigger fenced yard. Taj could run to his hearts desire. He would sit all day on a grassy knoll under a coconut palm, waiting for any delivery trucks, golf carts, or skateboards to pass by. When they did, he would explode like a bolt of lightning, chasing them up and down the fence. He did this so often, that Taj carved his own tunnel through the hedges along the fence.

Tragically, Taj’s sister Kona was diagnosed with a rare and aggressive bone cancer at only 6-years-old. She declined quickly, even after drastic measures were taken to save her life. It was a horrible death, and horrible to witness. Not long afterwards, I went through a divorce. It was a difficult time, but Taj was there to comfort me. He kept me active, and motivated me to go outside. Soon, we were hiking together more than ever.

There was a fantastic trail within walking distance of my house. It began in the dry, desert like conditions of Launipoko. After only an hour of hiking, the trail became a dense rain forest within a valley of the West Maui Mountains — surrounded by coffee plants and guava trees. Taj and I would sometimes spend half a day on that trail. Once, he tried crossing an old rickety bridge over a creek bed along the trail. The bridge gave way under his feet. Half his body was hanging on. The other half dangled fifteen feet above the rocky creek bed. I inched out onto the bridge, and pulled him to safety.

After traveling back to Florida for the holidays, I met a beautiful girl from Sarasota. Our relationship began long distance. I called Emily daily from Maui, often from a trail or mountain top with Taj exploring in the background. As our relationship blossomed, we eventually took it to the next level by moving in together in Sarasota. So, Taj boarded a plane back to his home state, and traveled across the Pacific Ocean once again.

Taj was 9-years-old when he met Emily and his new little brother, Rudy, an adorably egotistical Maltese. They went on daily walks together around Sarasota Bay, and the charming neighborhoods of the area. Taj’s age was beginning to show. He didn’t have the energy he used to, but he still loved his walks — and food.

One day, Emily crafted herself a magnificent turkey sandwich after work. She sat down to eat it, turned her head for a moment, and Taj snatched it from her plate and scarfed it down. Frustrated, Emily went back to the kitchen, and made herself another picturesque sandwich. Again, she sat down to enjoy her meal, and Taj swiped it off her plate again, wolfing it down in seconds. Taj almost died in that moment. Emily was furious, and I was dying laughing. Emily learned her lesson about eating around Taj after that.

After Emily and I got married, we moved back to Maui to sell my house. However, Taj was too old for another 24-hour flight across the world in a cargo bay. So he stayed with my parents and his cousin Pearl — the sweetest Labradoodle in the world. What we thought was going to be a few months back on Maui turned into almost 2 years. In the meantime, Taj lived happily with my parents. However, Taj suffered hip dysplatia during this time, and underwent surgery.

We finally sold my house. Then Emily and I moved to Colorado for my business. We picked Taj up from my parents, and he traveled with us to Boulder — another town that’s heaven for dogs. Unfortunately, Taj never fully recovered from his hip dysplatia. He couldn’t run like he used to, and had to be carried up flights of stairs. But that didn’t slow him down too much. He still hiked through the flatirons, chased after ground hogs, and rested by mountain streams in the cool Rocky Mountain air.

When our time in Colorado ended, we moved back to Sarasota. We purchased a historic little bungalow near downtown. He spent his twilight years in the home. We took daily walks until he was no longer able. In his final months, Taj met my son, Wyatt.

Near the end, Taj’s spinal arthritis was so bad he could barely stand on his own, often falling back down and refusing to try again. I always carried him up and down the three steps that led up to our house. He was unable to walk far, and constantly panting in pain. He still had his good moments, and never passed an opportunity to steal food — even til the end. Only weeks before he passed, he stole and ate and entire Costco sized pack of dog treats.

Based on the advice from our vet and others, we decided it was time. It was no easy decision. We could have “kept” Taj alive. But it would have only been for us — to spare us the guilt of making such a difficult decision. His quality of life was a shadow of what it used to be, and most his days were spent in pain. Taj was merely existing. He couldn’t be the dog he wanted to be for us. We didn’t feel it was fair to him to drag it on.

So we scheduled an at-home euthanasia. In the days leading up to his last, Taj was treated to pot roast, salmon, and lots of treats. My mom came over to be with us and Taj in his final moments. Then, the vet arrived with two technicians. The reality of the situation set in. We all gathered around Taj on the floor, and petted him gently as the vet began the process. It was horribly sad. But it was peaceful. Taj seemed to welcome the transition to the next life. There was no stress, and no pain. With all of us in tears, Taj passed away. The vet confirmed it was his time, and respectfully left us to grieve.

I buried Taj in the yard. I wanted to always know his final resting place, and I wanted to be the one to return him to the earth. In the following week, I’ve visited his grave several times to reflect on the good times we shared. Taj was my companion for nearly 15 years. I loved him, and I’ll miss him.

I’ve had many dogs in my life, but Taj was the first that was entirely my responsibility — from a puppy onward. He ushered me from one chapter of life to another. He was there for so many milestones. And honestly, he had a better life than many humans. Taj explored the world, an provided me and everybody he met with and unconditional love. I hope he’s running endlessly through the pineapple fields of doggy heaven with Kona.