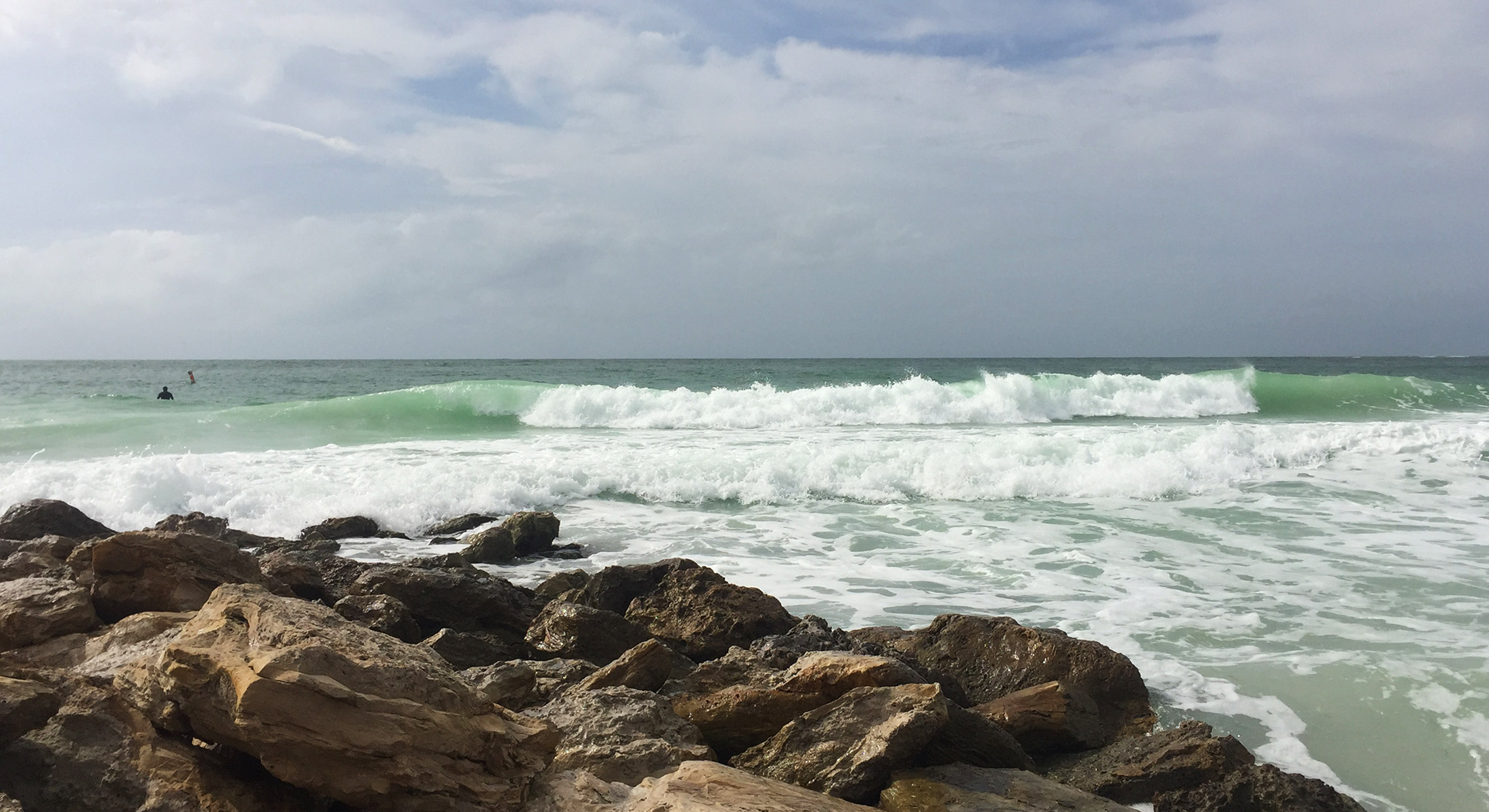 If you found this post, you’re probably a surfer that’s relocating to the Gulf Coast of Florida. Whatever it is that brings you to the snow white sands of the Suncoast, it probably isn’t the lure of elusive gulf waves.

Before I moved from Maui to Sarasota, I spent countless hours scouting every inch of gulf coastline for surf on Google Earth. Could the rumors be true? Is there no surf on the Gulf Coast?

A true surfer can’t live without swell, and you may just need to know if the Sarasota area can sustain your surf addiction. The good news is, it can. The bad news is — barely. You’ll need a flexible schedule. Waves on this coast don’t last days — they last hours!

So that begs the question. Is the surf good?

That depends on your definition of good.

If big waves are what you crave, the gulf has little to offer — unless you’re lucky enough to be on the good side of a hurricane.

That being said, I’ve scored some sick days of surf in the gulf! I’ve been barreled, screamed down the face of outside bombs, and caught windy drift sessions with a current so strong I’ve been swept a mile down the beach within a matter of minutes.

Gulf waves can be deceiving. The swells are traveling from a shorter distance than the Atlantic or Pacific Ocean. So if they have size, they also have speed and power. I’ve had my ass handed to me on some gulf waves. I thought, “Psh! I surf Honolua. These are baby waves!” The gulf checked my ego. These waves usually won’t hurl you and hold you under like a long distance swell. Instead, they slap the shit out of you — over and over again.

Good days are rare, but they are amongst my most memorable sessions. There’s something about catching great waves where there aren’t supposed to be any that leaves a lasting impression.

On other slightly less rare days, the Gulf Coast of Florida can serve up small wave perfection. Fortunately, the Gulf Coast gets more offshore winds than the east coast of Florida. Unfortunately, those offshore winds usually kill what small swell is in the water. I’ve spent many mornings sitting on the beach staring at perfectly shaped waves, dreaming they were at least 2 feet bigger — or I was 4 feet smaller. When the waves are waist high with no wind or light offshores, you can catch glassy longboard perfection.

However, most of the time you can expect complete and utter flatness — for several weeks at a time. The gulf isn’t referred to as the “Lake of Mexico” for no reason.

If you can survive the jonesing, you might be asking the next question…

When can I find waves?

Finding waves in Sarasota takes patience, a lot of scouting and a fair amount of luck. However, certain times of year are better than others.

Hurricane season starts in June and goes through the end of November. This time of year has the potential to serve up the best waves. However, it’s entirely unreliable. Quality hurricane swell is much more common on the East Coast of Florida than the West Coast. If you’re lucky enough to score a hurricane or tropical storm in the gulf (that hopefully isn’t going to devastate a town) then you could be in for a treat. If the winds are offshore and the waves are cranking, you’ll score overhead waves with warm water and no crowd. You’ll be lucky for this to happen once a year.

If the hurricane is too close to shore, the gulf is a disaster — quite literally.

When the hope of a hurricane fades, the waves start to get a little more consistent. Most Gulf Coast swells occur during the winter. Catching the right swell usually requires a cold front moving across the gulf. The wind will be onshore for a couple days as the swell builds and the front moves closer. Just before the front reaches shore, the waves will be at their biggest. However, it’s usually windy, blown out, victory-at-sea conditions during that time. Unless you can find a lot of wind shelter, this is not the right time. But more on that later.

Almost all Gulf Coast beaches have a sandy bottom. That’s convenient for walking out to the waves without stepping on urchins and sharp reef. However, the thing about sandbars is — they move. So keep a close eye on the buoys. Start searching when they’re up — even at a couple feet. Local knowledge and scouting can really pay off. Some days I’ve gone searching on a prayer, and scored a fun longboard sandbar session all to myself.

If you’re really jonesing, you have the option to wait out a thunderstorm. They occur almost daily during the summer. The storms bring wind chop with a dangerous side-effect — lightning. Right after the storm passes, you may have a very quick window to score some little waves. Just be careful. Lightning can linger.

Where do I find the waves? 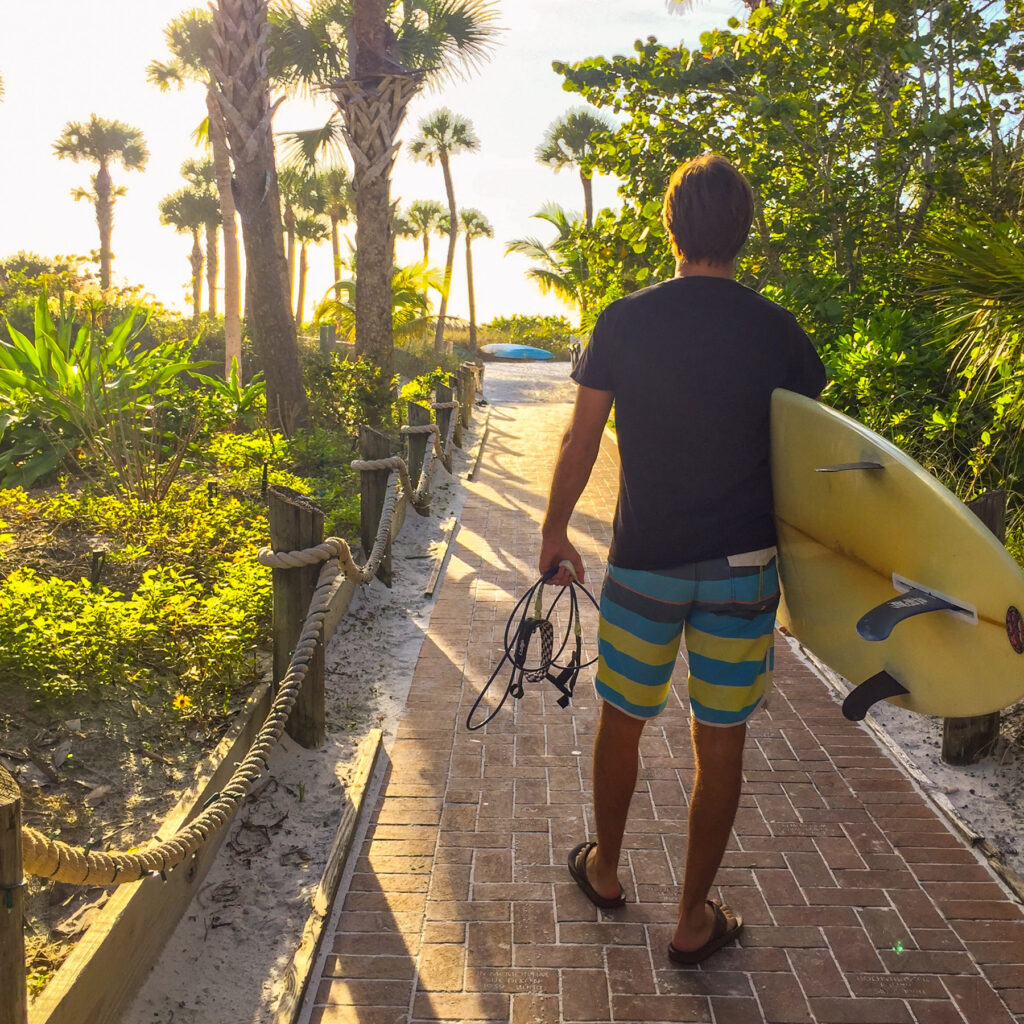 Growing up in Florida near Orlando, there was never much reason to check the Gulf Coast for waves. It was an equal distance to the East Coast, and the surf is much more consistent over there. Lucky for Gulfsters, most Floridian surfers still feel the same way.

After moving to Sarasota, I scouted the coast from St. Petersburg to Captiva in search of surf. I’ve paddled long distances along the coast to find a rideable shin-high wave. Finding surf here takes dedication, patience and a knowledge of how the swells work. On the right day at the right spot, you can have a lot of fun — all to yourself!

I’ve worked hard to find some of my favorite spots, so I won’t be revealing those. The gulf goes largely unnoticed as a US surfing location, and I’d like to keep it that way. Although, I don’t think that will be a problem given its inconsistency. My favorite surf spots in Sarasota aren’t easily accessible. That keeps the crowds thin to none — just how I like it. Plus, I don’t think other locals would appreciate me revealing the secret spots. I’ve already got the entire town of Cocoa Beach against me. However, I will mention a few of the known breaks.

The key to getting good surf on the Gulf Coast is finding protection from the wind. Wind protection in Florida is much harder than it sounds. The highest point above sea level in the state barely cracks 300 feet. So you can’t hide behind a cliff face or within a cove like you can in Hawaii or the West Coast. The whole state is basically a sandbar, floating a few feet above sea level. So you’re gonna need to find a pier, inlet or jetty. The Venice Jetty is the best jetty you’re gonna find in Central Florida. Unfortunately, all gulf surfers know it.

If a front is pushing from the north, the south jetty is the place to be. A front from the south, and the action is at the north jetty. On a good day, this is one of the few spots in the gulf that gets really crowded. Deservingly, it can be a very fun wave! I’ve had many great days here — jumping off the rocks at the end of the jetty on bigger days, or catching knee-high perfection in the hot summer waters as the sun sets like the cover of Endless Summer. When the waves are up, the jetty is arguably the best wave on the gulf coast.

The top rated beach in the country is gorgeous if you’re looking for an expansive beach with soft, snow white sand and warm water. If you’re lucky, you can find some fun little waves on the island too. However, the island doesn’t have a pier or jetty. So you will be relying on finding the right sandbar with full exposure to the wind. Sandbars are shifty little devils, but they tend to follow a pattern — if you know where to look.

The home of the Gulfster surf report! These awesome guys have been reporting and forecasting Central and South Florida Gulf Coast surf since 2002. Thanks for the dedication guys! I think the entire Gulf Coast surfing population relies on those reports. Check their website for pics and videos of gulf surf.

Bradenton Beach on Anna Maria Island has a couple concrete piers that provide the necessary wind shelter for surf. I’ve been going to AMI since before I could walk, but I never tried surfing it until I was an adult. I’ve had some fun days surfing here within the past few years. However, it’s usually a little too far north for me.

I’ve barely scratched the surface of finding waves in the Florida Panhandle. It’s a helluva boring drive from Sarasota up there. So why waste the time when it’s faster to fly to Puerto Rico for much better surf?

However, I did find myself at Pensacola Beach for a wedding about 3 years ago. To my amazement, I found perfectly clean waist-high waves and crystal clear water!

I met a surfer from the area at the wedding. He loved Maui, and we swapped stories about our favorite surf spots on the island. He went on to tell me about surfing the Panhandle. I was surprised. Compared to the Central Gulf Coast of Florida, the Panhandle is more consistent with bigger and cleaner waves. Also, it’s far less populated, and there are even less surfers in the water.

Eventually, I plan to make that long, grueling drive to the panhandle for a surf trip. I’m stoked at what I could find.

How do I survive as a Gulfster?

Above all, with patience. These tips will help as well:

Have A Versatile Quiver

On rare days you can break out the 6-foot shortboard and catch little barrels over a shallow, shifting sandbar. More often, you’re gonna need a longboard for cruising down the line on knee to thigh-high wavelets. Even more often, you’ll need a SUP. You’ll be lucky to find a rideable shin-high baby bump breaking over a shallow sandbar. Otherwise, try speed paddling the mangrove tunnels for a little fun.

Kite surfing equipment, skimboards and a skateboard won’t hurt the quiver either.

Waiting for the perfect day is a luxury you don’t have on the gulf. If there are sloppy knee-high waves in the water, you better take advantage of it!

Get A Fishing Pole

On the gulf, you’ll probably be surfing around fishermen. Sometimes, they don’t mind. Other times, they do. So my motto is, if I catch more waves than they catch fish, it’s a surf day. They can cast a line anywhere! Other days, if you can’t beat em, join em. If there’s one thing the Gulf Coast provides in spades — it’s excellent fishing.

Drive To The East Coast

As mentioned, the EC has much more reliable surf. In less than 3 hours and one tank of gas you could be surfing Playalinda, Sebastian Inlet or Ft. Pierce.

The Caribbean is next door. Our friends in Puerto Rico and even the Bahamas get Hawaii quality surf on a regular basis. In the time it takes to get to the EC, you could be in the water at Rincon.

Now You Know, And Knowing Is Half The Battle

The Gulf Coast of Florida should probably never be a surf destination, unless you’re just checking another body of water off the list. However, it’s not without some good waves. If you’re moving to the area from California, Hawaii or even Cocoa Beach, prepare to suffer the doldrums. Expect nothing, and you might be pleasantly surprised.

16 Comments on “Surfing In Sarasota?”