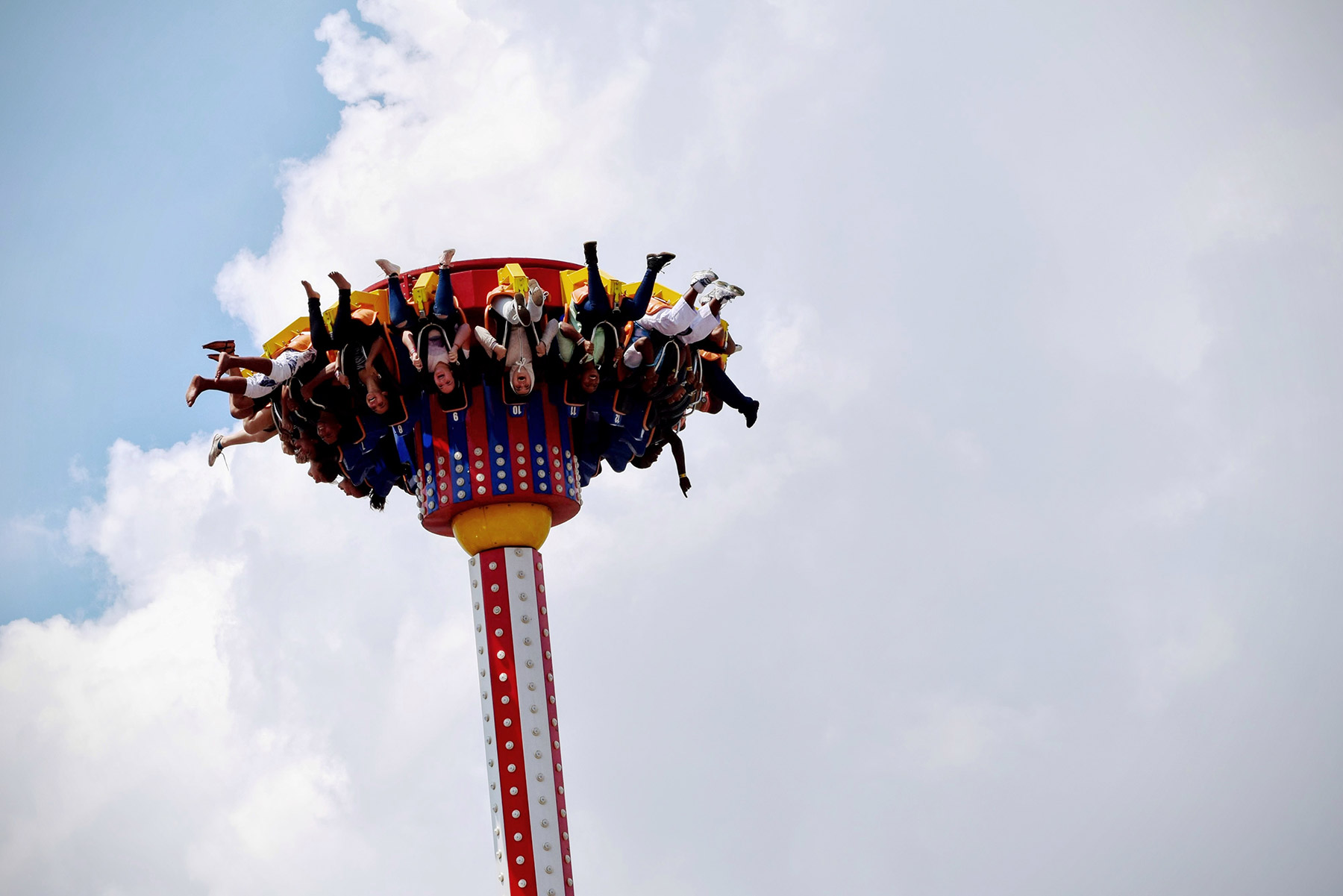 My Experience With Vestibular Neuritis

Vestibular Neuritis is a rare inflammation of the vestibular nerve within the inner ear. I got it, and it sucks.

In November of 2019 I was suddenly stricken with Vestibular Neuritis, a rare condition in which the vestibular nerve within the inner ear becomes inflamed. Although it sounds innocent enough, it will turn your world upside down — literally.

I’m not a doctor, just an unlucky dude that contracted Vestibular Neuritis. I’m an active adult male in my late 30’s. This is an account of my experience in hopes that it will help others diagnose themselves, and know they’re not alone.

My wife has recently started line dancing. I’ve been attempting to learn a handful songs, so I can join her on the dance floor. After a night of dancing and a couple drinks, we headed home. I went to sleep, feeling totally normal.

In the morning, I felt somewhat nauseous as I laid in bed. At first, I thought it was just a hangover. However, I only had one beer and a mixed drink. Not enough to typically give me a hangover. So, I got out of bed to start the day.

Immediately, I collapsed to the floor. I attempted to stand, and fell back to my knees. I was overcome with extreme dizziness and nausea. Crawling to the toilet, I curled over the bowl and vomited. When there was nothing left, I managed to climb back in bed.

The slightest movement sent my head spinning like a top. It was a horrible dizziness. The dizziness caused nausea and headaches, which in turn, induced vomiting. The only thing that helped was absolute stillness. So, I laid in bed motionless, for hours.

When my wife suggested taking me to urgent care, the thought of walking to the car sounded like a journey through Mordor. Eventually, I made my way to the car, stopping to puke multiple times.

Walking was extremely difficult. However, riding in a car was murder. Every curve, turn, and speed bump on the way to the clinic was an awful experience. Upon arriving, I sat in the waiting room, hurling my guts into a bag.

The urgent care doctor thought I was experiencing an appendicitis. So, he sent me to the Emergency Room. By the time we made it to the ER, my dizziness and nausea was so bad that it was impossible to walk. So, Emily escorted me to the waiting room in a wheelchair.

After waiting for an eternity, my name was called. Then, they took my blood, hooked me up to an IV, threw me on a gurney, and wheeled me into another room.

This was all a very new experience for me. I’ve barely seen a doctor in the past 25 years. Much less been rushed through the hospital on a gurney. It was surreal.

When the doctor came in the room, he asked a series of questions. Most of which seemed like cognitive tests. He had me perform physical tests, like moving my pointer finger from my nose to his hand.

The doctor made a remark about my “green” appearance. I thought he was joking. He wasn’t. I was truly green! The doctor then left to determine whether or not I had an appendicitis.

I was so miserable, I didn’t care what the doctors had to do. If it was surgery, so be it. I just wanted the misery to stop!

Fortunately, it was not an appendicitis. Instead, the doctor said I had BPPV — or vertigo. I felt relieved that I wouldn’t need surgery. I would just be dizzy for a day or two. Then, it would go away as quickly as it occurred. I could live with that!

In hindsight, I would have preferred an appendicitis.

The doctor gave me some Dramamine, the same stuff for sea sickness, and sent me home.

At this time, I hadn’t realized I had been misdiagnosed. You see, BPPV vertigo is quite common. It’s the result of crystals within your inner ear becoming dislodged or displaced. Typically, it only lasts a few seconds to a few days. In many cases, it can be fixed by performing a series of head rotations and exercises.

There are plenty of YouTube videos illustrating a variety of exercises to reset the crystals. Many of which involve throwing your head down in dramatic “cat cow” yoga style movements, or violently shaking your head from side to side. Since I thought this was I had, I attempted several of these exercises.

With vertigo, the exercises may help. However, with Vestibular Neuritis, they are needless torture. Basically, I was torturing myself.

You will likely hear something like this from friends and family, “Aunt Tessie had vertigo. They did some head exercises, and poof! It went away!” That’s not the case with Vestibular Neuritis.

The first few days were pure hell. Each morning I awoke, I hoped the symptoms would have vanished.

Basically, I was bedridden. Looking at screens like my phone, computer, or television sent my head spinning. Even looking down at my spoon while trying to eat a bowl of soup made me horribly dizzy and nauseous. Mostly, I slept and listened to music and podcasts.

After a few days, depression sets in. It’s no way to live. You’ll wonder if you’ll ever be active again. Personally, as a surfer, having your sense of balance vanish entirely is akin to being a singer, and waking up one morning to find your voice is gone.

After 5 days, it wasn’t much better. Based on my research, I suspected this was more than a simple case of vertigo. So, I scheduled an appointment with my doctor.

In her case, Vestibular Neuritis lasted 3 months, and it hasn’t recurred. Unfortunately, 3 months is not a short length of time to live this way. However, it did provide hope, and a light at the end of the tunnel.

She prescribed some heavy steroids, and over-the-counter nasal spray, and allergy medication like Benadryl or Zyrtec.

Unfortunately, the only cure is time. The length of time varies. Most sources online state that Vestibular Neuritis lasts 3 weeks. In my experience, that’s false. The worst of the condition might last 3 weeks. However, don’t get your hopes up like I did, and believe it will be entirely gone within 3 weeks. I would expect symptoms to persist for multiple months.

As of writing this post, it’s been 2 months since I was infected with Vestibular Neuritis. While life is somewhat back to normal, I still have difficulty moving my head quickly or looking over my shoulder.

On the bright side, I’ve started riding a bike again, but I’m still unstable. I attempted surfing a couple days ago. Unfortunately, I got very dizzy within a matter of minutes and had to exit the water.

Honestly, I didn’t feel like any of the prescribed and/or over-the-counter medication helped. The only thing that has consistently helped my nausea and reduced the sensation of dizziness is marijuana.

I’ve been a casual user of the wacky tabacky prior to my diagnosis. However, since contracting Vestibular Neuritis, weed is the only thing that I can confidently say has helped for certain. My experience with this condition alone is enough to solidify my stance on the legalization of marijuana, but that’s another story.

According to the doctor, it’s a viral or bacterial infection of the vestibular nerve. She said most people are infected with Vestibular Neuritis when they have a cold or the flu. According to her, it tends to happen more in the fall and spring.

In my case, I was completely healthy leading up the event. So, I’ve got another theory. In the Gulf of Mexico, there is a seasonal algae bloom known as Red Tide. It’s a big deal, often shutting down beaches and killing thousands of fish and sea life.

As a native Floridian, I’ve been around Red Tide for much of my life. I’ve surfed and swam in Red Tide several times. While it’s definitely not recommended, surfers of the Gulf Coast will go to extremes to score decent waves. My luck caught up with me.

Of course, that’s just a guess. There’s no way to really know. Regardless, I’ll be wearing ear plugs and/or flushing my ears out with hydrogen peroxide after being in the ocean from now on.

It’s a long road. Each day my wife asked, “Is it any better?” My answer was usually the same, “Slightly… I don’t know. Maybe 1 percent better.”

In my experience, it has been a very gradual recovery process. Although it is significantly better, my symptoms still persist. After 2 months, I still feel the dizzy sensation daily. I hope after another month it will be entirely gone, and I can get back to my life as usual.

The recovery process feels so minuscule, you might wonder if you’re getting better at all. The good news is, you will probably make a full recovery. Even better, it’s unlikely you will ever have Vestibular Neuritis again.

If you’re an active person, find something healthy to do with your time that doesn’t involve balance — like painting or music. Additionally, appreciate the people in your life providing help. My wife deserves a medal of honor for helping me through this time.

108 Comments on “My Experience With Vestibular Neuritis”